The reasons to pair fromage and beer are endless, especially given the ubiquity of great French cheeses and craft beers. However, with great fromage and beer comes great responsibility. Unlike wine, beer has a bigger range of flavor, which opens up a new world of unexpected, delicious pairings.

From washed rind cheeses and blues to IPAs and farmhouse ales, pairing cheese and beer might seem overwhelming, but it need not be complex. So, rather than making cheese and beer pairing a science, here are three quick tips to get you started. 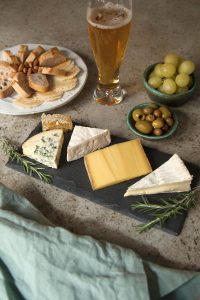 The secret to enjoying fromage and beer is to avoid overpowering either. When you pair similar intensity cheeses you’ll be able to taste both clearly and enjoy their subtleties. For example, when you pair a milder cheese like Brie with a strong IPA, the flavor is going to be mostly the IPA! A good rule of thumb is to match the intensity of mild cheeses with light beers and strong cheeses with strong beers so you bring out the best in both.

As with intensity, it helps to consider the texture of the cheese in relation to the consistency of the beer. With softer, creamier cheeses that coat the mouth like triple crème or Brie, a more effervescent beer like a pilsner or lager will cut through the higher butterfat content and highlight the rich flavors. On the contrary, harder cheeses like Mimolette or Comté, warrant a less effervescent beer like a cask ale, stout, or porter. Typically, the higher the butterfat content, the higher the chance a more bubbly beer will pair well.

Before you buy your fromage, think about what kinds of beer you like. If you like darker, heavier beers like Belgian ales or IPAs, then strong cheeses like Epoisses or Pont L’Évêque will be good matches. Or, if you’re into blond ales and pilsners, Emmental or Brie might work best. Ultimately, there are no hard and fast rules with fromage and beer. If it’s fermented and you enjoy it, you should pair it.

Although there are no rigid rules, here are some recommended pairings that are guaranteed to be magnifique.

For more fromage secrets, recipes, and tips visit www.cheesesofeurope.com or download the Cheeses of Europe app.

Taste Vacations (or, more specifically, our overarching travel company, Zephyr United Travel Collection, which is our sister company) is hiring a new office employee to conduct the marketing for all three of our travel brands.

As you probably know, Zephyr United is a small company. We currently have 4.5 full-time employees (including Allan), and one of those positions is left vacant by our Marketing Lead to pursue a new career path.

We are specifically looking for an individual with marketing experience, preferably in the travel industry. The individual also needs to have an outgoing, caring, fun personality, as all our office staff also guide tours. The pay is not going to make you rich, but the lifestyle benefits are superb. Plus, you can work where you live as we gave up our brick-and-mortar office long ago (way before the pandemic).

Do you know someone who might be interested? Please refer them to the job description and application form. Application deadline is August 10.