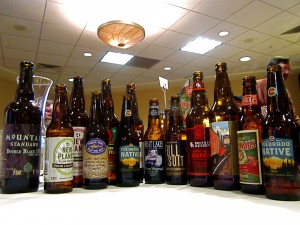 We the conference organizers have finally fit the last piece to the puzzle – a Beer Crawl on Saturday night featuring four (updated: five!)  of Boulder’s best drinking establishments, all located on or nearby Boulder’s famous Pearl Street Mall.

The Pearl Street Mall is the heart and soul of Boulder, a walking mall that unifies the community. It is where visitors come to shop and locals come to dine and drink. During warm weather you will see a dozen street performers and on good weekends the walking mall boasts unique celebrations and festivals.

After dinner on Saturday, buses will drop willing participants on the Mall. Four fantastic local establishments have agreed to host conference participants by providing a free beer to anyone who flashes his or her conference badge. You’ll make your way the mile back to the Boulder Marriott, checking out Boulder as you go.

Our generous pubs include four favorites of your local organizers:

What more can you ask to round out your Boulder beer drinking experience than a beer crawl – with beers provided! And for those of you on the Beer Crawl, remember the address of the Boulder Marriott so you can get home: 2660 Canyon Blvd, Boulder, CO 80302.